is happy to announce the presentation titled 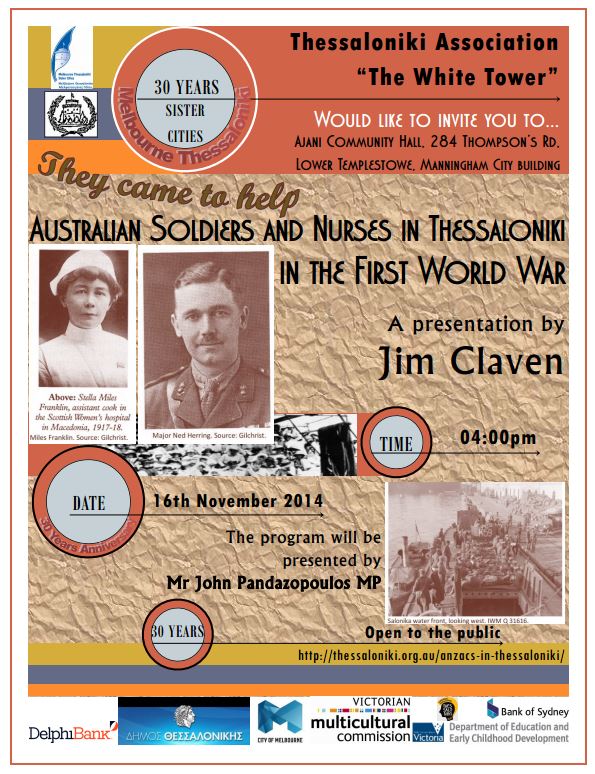 Jim Claven has visited Thessaloniki and Macedonia to research the story of the Australians who came there in the First World War. Here he re-tells their story.

Walking along the quay at Thessaloniki is quite a wondrous experience. From the former railway station, past the grand hotels and on to the White Tower, all sitting on the edge of the bay extending off to the horizon, one is struck by the peaceful beauty of the place.

It is hard to imagine that these very stones have witnessed war as well as peace. The quays once bustled with army transport ships, the harbour massive battleships. The beautiful avenues of the city once sounded to the march of soldier’s boots as well as the loud carousing in the bars and cafes of the city. And above all the castle and the hills beyond, to the battlefields of yesterday.

Each year we celebrate the liberation of the city and its re-unification with Greece in 1912. Yet barely three years later, Thessaloniki became the centre of a major campaign in the First World War that would last until 1918 and the end of the war.

What is less appreciated is the Australian connection to this campaign, Thessaloniki and its inhabitants. For around 450 Australians took part in this long military campaign. They arrived at this strange new city on the bay, with its imposing castle, encountering a new people, culture and environment.

Amongst the horrors of war and disease and a city overflowing with refugees, they were able to see in its antique ruins and ancient churches the classical and biblical stories they had only read of. They would not only survive the bitter winters and hot summers, but would wonder at the flowers, birds and animals that abounded in the surrounds of the city and beyond. They would travel throughout Macedonia, even to far Edessa, writing of the food, villagers and sights. And they would enjoy the entertainments of this great, big city, with its Levantine cafes and shops, cinema’s and dance-halls.

These Australians are often forgotten. While most of the nurses arrived from Australia as part of the Australian Army Nursing Service, the vast majority of the soldiers travelled from the United Kingdom in a variety of British Army units. Apart from a few who had already enlisted in the Australian Imperial Force and the members of the AIF’s mule train unit transferred from Gallipoli via Lemnos, most had joined the British Army while working or studying in the United Kingdom. Others had travelled specifically to gain commissions in the British Army.

The women from Australia would staff four British Hospitals established to the east of the city – at Hortiatis and Kalamaria, as well as the Scottish Women’s Hospital to the west of the city at Arnissa.By the end of 1917, the Australian nurses would total a fifth of the British Army’s nursing staff in northe