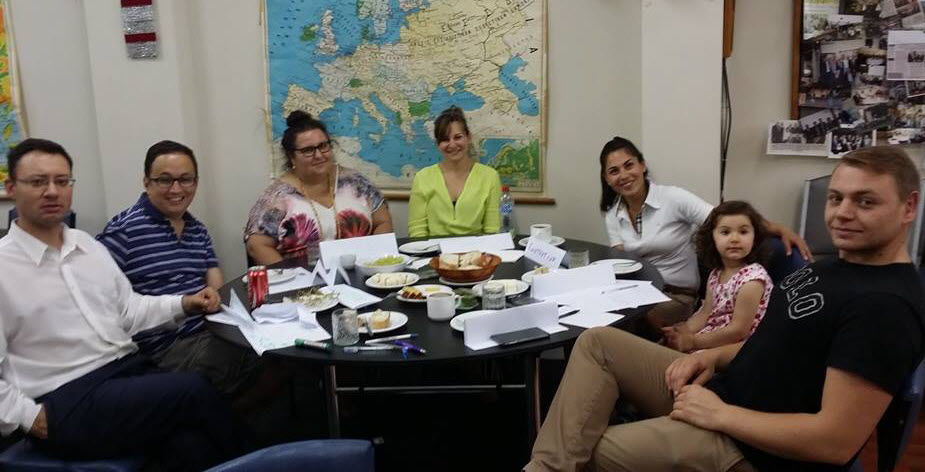 …and the Chamber of Secrets

‘Your identity is your most valuable possession. Protect it.’

So said the great Elastigirl in the 2004 Pixar film ‘The Incredibles’, but can we take her word for it?

Before I make a completely unacceptable sweeping statement let me say that I do not like to make sweeping statements. But here goes. Greek-Australians work very hard to promote the Greek identity. We all do it in our own way. Some of us form collectives and organise dancing groups, singing groups, and eating groups. Others form businesses to promote Greek food and drink. Some write while others tell stories. Some paint tree trunks white and others start classroom lessons by pointing out that today’s topic comes from a Greek word (economics? Easy. From οἶκος and νόμος. Oἰκονομία). In a shocking plot twist Dr Who would uncover that our identity itself is actually the promotion of our identity.

Discussing this with a friend one day he raised the question no one dares to speak; ‘Is Greek identity worth saving?’ My natural response was ‘offcourse it is’. It was clearer than Greece’s Oxi (of 1940, not 2015). Greeks have always kept their identity. We did it while under Roman rule. We did it under Ottoman rule. And by golly we will do it in the antipodes. He pressed me on this though. Not in a Hulk Hogan kind of way, more like Graham Norton. ‘What was so special about our culture that we thought we had to fight to keep it?’

I remove the quotation marks and ask you to consider this for yourselves dear reader. Is Greek identity worth saving? Should we fight to promote it? Or should we just allow ourselves to gently float where the tide may take us, to blend into the common and dominant culture. Last week the dominant culture involved strong discussion of whether Tay Tay and Loki are a real couple or a Hollywood publicity stunt. This week it involves finding Pokemon via an app, and next week I look forward to being told what my identity will be by what trends most strongly on Twitter and Facebook. Oh the ease of being mainstream and having my identity nourished by tabloid magazines at the supermarket checkout.

In the days that followed the question would not leave my mind. I was not even at a stage of looking for an answer. I was simply troubled that the question existed. And then I had a coffee with a newly arrived Greek and we started discussing Greek identity. She launched a passionate monologue of how important the Greek ταυτότητα was. Being a daft male who takes far too long to understand implied language I pictured the impossibly large I.D card that my parents insist on keeping on them despite the fact it cannot possibly fit into any legally purchased wallet. The longer she spoke though the more her words did not match the I.D. card in my mind. And finally it clicked. Tαυτότητα was not the physical identity card, but the intangible Greek identity itself; the qualities we hold deep inside us that make us Greek. She continued to discuss how important it is that we develop our Greek ταυτότητα because it is rich and beautiful and above all else helps to make us an άνθρωπο.

Reflecting on her words, I considered that as Greeks we all have a part of us that believes the Greek ταυτότητα makes us better people; that it gives us that something extra. Question answered dear friend who dared to ask the question. If the Greek identity helps to make us better people then offcourse it is something worth fighting for.  So now to the real questions. What does the Greek ταυτότητα give us? Could we identify the specific elements of our ταυτότητα that we wish to keep? And can we work out ways to keep and promote these elements?   These are questions the entire Greek community needs to think about and discuss so that together we can develop a list of these specific elements. It would be like creating a giant patchwork quilt (a πάπλωμα παιδί μου) where each square is an element of our identity we hold dear. We all have something to add to this discussion. I myself have two qualities I would like to add to the list. I struggle to find the right word however so let me tell you a story and you can help me decide the name.

The first quality of Greek identity was made clear to me on a train trip to my home town of Amaliada. Somewhere between nowhere and Amaliada the train came to a sudden halt. Outside were paddocks and farm animals. Funny how unknown roads can be quaint when you are secure on the train but scary when your means of getting to your destination become unknown. In the best tradition of my Australian upbringing I stayed calm and steeled myself for a long walk until a payphone came my way. A man sitting two rows down spoke on a phone to a friend and announced to the carriage his friend would shuttle those who needed transport to Amaliada. I did not ask him for help as one simply does not speak to strangers.  He approached me and said ‘Σας έχω δει γύρω . Είσαι από την Αυστραλία, έρχεσαι?’ I was struck by how cold I was to strangers and how generous to strangers he was. I was immediately made to feel at home by their generosity. We ended up at a taverna where I became firm friends with Θωμᾶ and Σωτήρη over music, food and drink. I thought it was my chance to pay them back, yet they would not hear of allowing me to pay. It was their town and they would φιλοξενήσει me beyond my protestations that I should pay. So the element of the Greek identity that was revealed to me was a generosity of spirit, a largesse. An ability to be free and open with people and make them feel comfortable. And to help where you can. I do not know what to call this quality but I love it. It contrasts sharply with the society I grew up in where I was not to talk to strangers and was to keep to myself. When I use this quality I feel warm and alive. A little help naming this quality please?

The second quality of the Greek identity that I want all Greeks to have came from a subsequent visit to my home town of Amaliada. I walked off the bus at siesta time which was clearly not the done thing. Luckily I came across my friend Θωμᾶ who was just finishing his work at the bookshop. He greeted me more warmly than I deserved and insisted I come with him to the only open cafe. We sat down next to a tavli match. Two aged gentlemen played in the spirited way tavli is meant to be played, yet their conversation was about the benefits of solar power versus nuclear power. I could not help but to be drawn into the conversation and it seemed natural that we all talk. Despite not being in the town for years I immediately felt I belonged because I was allowed to participate in a conversation with strangers. This is the second quality of Greeks that I love. The ability and desire to have a conversation about anything and everything with anyone. At the end I got up and told them good day and went to my grandparents house. But the conversation was interesting and I was certain I would have many more great conversations with many more people. Greeks are interesting! They are inquisitive. They ask questions and want to learn about the world. They can have a conversation about anything here and now and enjoy themselves. I contrasted this with people who are completely disinterested in the world around them and only interested in themselves and/or their gadgets. The world around us is interesting and I love the Greek desire to learn and interact. Can I call this quality discourse? Inquiry?

So in considering whether the Greek identity is worth saving, I came to be utterly convinced that it is worth saving. I could think of two qualities that I would like to see saved and to be passed onto Greeks everywhere. I believe there are several more qualities that we need to identify, define, and work out how to promote in our culture. So dear friend who asked me the question. I leave the final words of this discourse to a group of musicians who best encapsulate my feelings as a Greek of the antipodes. The lyrics of Midnight Oil’s ‘The Dead Heart’;

We carry in our hearts the true country

And that cannot be stolen

And that cannot be broken.

Thank you Peter Garrett for giving me the words to express my feelings about Greek identity.

[stextbox id=”custom”]Suffice to say that Thessaloniki Association “The White Tower” wholeheartedly supports this initiative by the Olympian Society and we wish them every success. There will be a meeting held on July 26th, at 7.00pm at the Olympian Society’s building at 317 Victoria Rd Thornbury. Clubs have been invited to send 1-2 representatives to the meeting to discuss the draft proposals which are not set in concrete. All participants are invited to make their own proposal/s. Thessaloniki Association will be there.