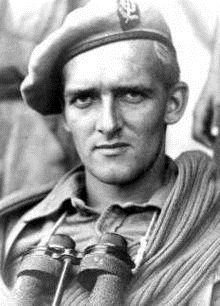 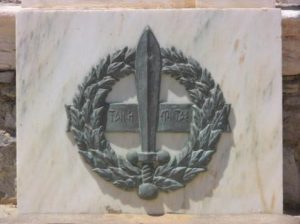 In early 1943, No. 62 Commando was disbanded and its members dispersed amongst other formations. 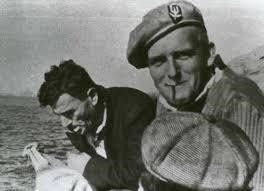 Lassen was among a number who went to the Middle East to serve in the Special Boat Section, then attached to the Special Air Service.

During his service with the Special Boat Section (SBS), Lassen served with soldiers from a range of Allied countries, including New Zealand and South African. A key role was played by members of the Hellenic military forces serving with the Greek Sacred Squadron or Leros Lochos. One of the other key officer’s in Lassen’s unit was the Sacred Squadron’s Lieutenant Mavrikis. 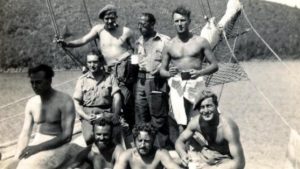 His service in the Aegean saw Lassen lead a number of raiding parties across a number Aegean Islands – Kalimnos, Simi, Santorini and Paros to name a few. In September 1943 Lassen acquired from a captured Italian officer a maltese terrier – Pipo – who would become the mascot of his unit and be known as Pipi – The Lion of Leros!

On 24 April 1944 he led a successful SBS raid on Santorini, taking out the garrison on the island and blowing up the building housing the radio installation with time bombs. Lassen and the force, with only two casualties, successfully withdrew on two schooners.

By October 1944, Lassen had taken part in the Allied advance into Athens and had risen to the rank of Major.

On 26th October, Lassen and 40 men landed 55 kilometres south of Thessaloniki with a mission to observe Axis forces in the city. After making contact with the local Greek resistance, Anders decided to “extend” his orders and help in the liberation of Greece’s second city before the Germans had committed more acts of destruction to the city’s harbours and infrastructure.

Following reconnoitring missions into the city on the 28th October – one conducted by Lassen and Mavrikis dressed as chicken sellers. , Lassen commenced his forces’ entry to Thessaloniki’s western quarter on the morning of the 29th October. Operation Undercut had commenced.

Along with the Greek Resistance, Lassen’s force were formed into a strange and elaborate convoy – Lassen and Pipo in the lead with his jeep, following by four “armed” fire engines, and all headed by a scout – a soldier riding a horse and armed with a bren gun! Reports tell of the people of Thessaloniki mobbing the Allied force, cheering them on.

German snipers opened up on the force and a major fire-fight took place at the Axis fule dump on the western outskirts of the city – 60 German soldiers were killed, 8 by Lassen himself, one of Lassen’s men wounded and the fuel dump saved from destrouction. 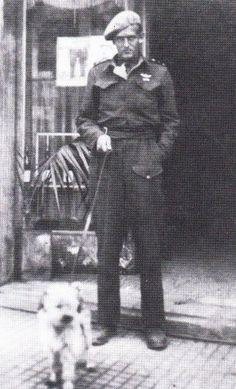 By the following morning the remaining German troops in the city had left – Thessaloniki awoke to liberation and the planned German destruction had been averted.

Lassen and his men were “garlanded with flowers by the exuberant population.” 5 November Anders and his men has returned to Athens.

From December 1944 to February 1945, Anders and his SBS unit was sent to Crete to lead Senforce, the Allied forces on the Island with responsibility for German prisoners on the Island.
Major Lassen leads a raiding force across Axis lines on the north-west coast of Italy, at Lake Commacchio in April 1945 – Operation Roast. During this operation – on the 9th April 1945 – Major Lassen is killed, aged 24.

For his bravery at Lake Commacchio Anders is posthumously awarded the United Kingdom’s highest gallantry award for his actions during Operation Roast in the final weeks of the Italian Campaign.

Anders is the only non-Commonwealth recipient of the British Victoria Cross in the Second World War. 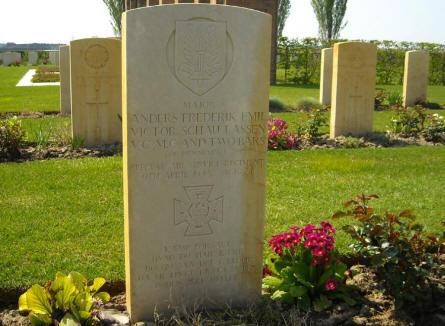 Anders is buried in the Argenta Gap War Cemetery in Italy (his grave pictured at right), memorialised in his home town church and with a statue in Copenhagen in his native Denmark. Currently, a Danish-British consortium is currently working on a feature film based on nders Lassen’s life.

During his service Lassen had fought in North-West Europe, North Africa, Crete, the Aegean islands, mainland Greece,  Yugoslavia and Italy.

His VC medal is on display at the Frihedsmuseet (Museum of Danish Resistance) in Copenhagen, Denmark. 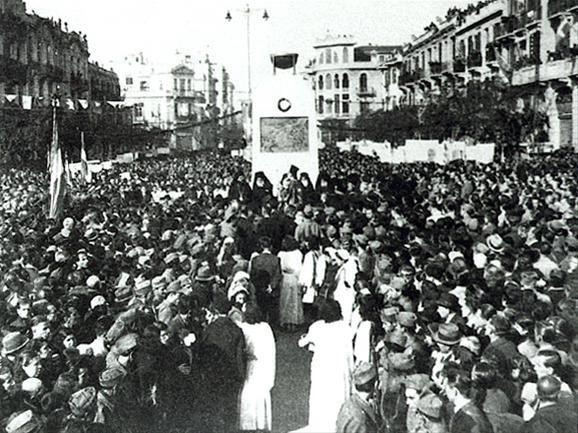 Illustration images sourced from the internet.

[stextbox id=’custom’]In order to book a place for this Special Event and if you have received an invitation please follow this link to “Book Now”.
NOTE: You will only be able to do this if you have a printed invitation. [/stextbox]