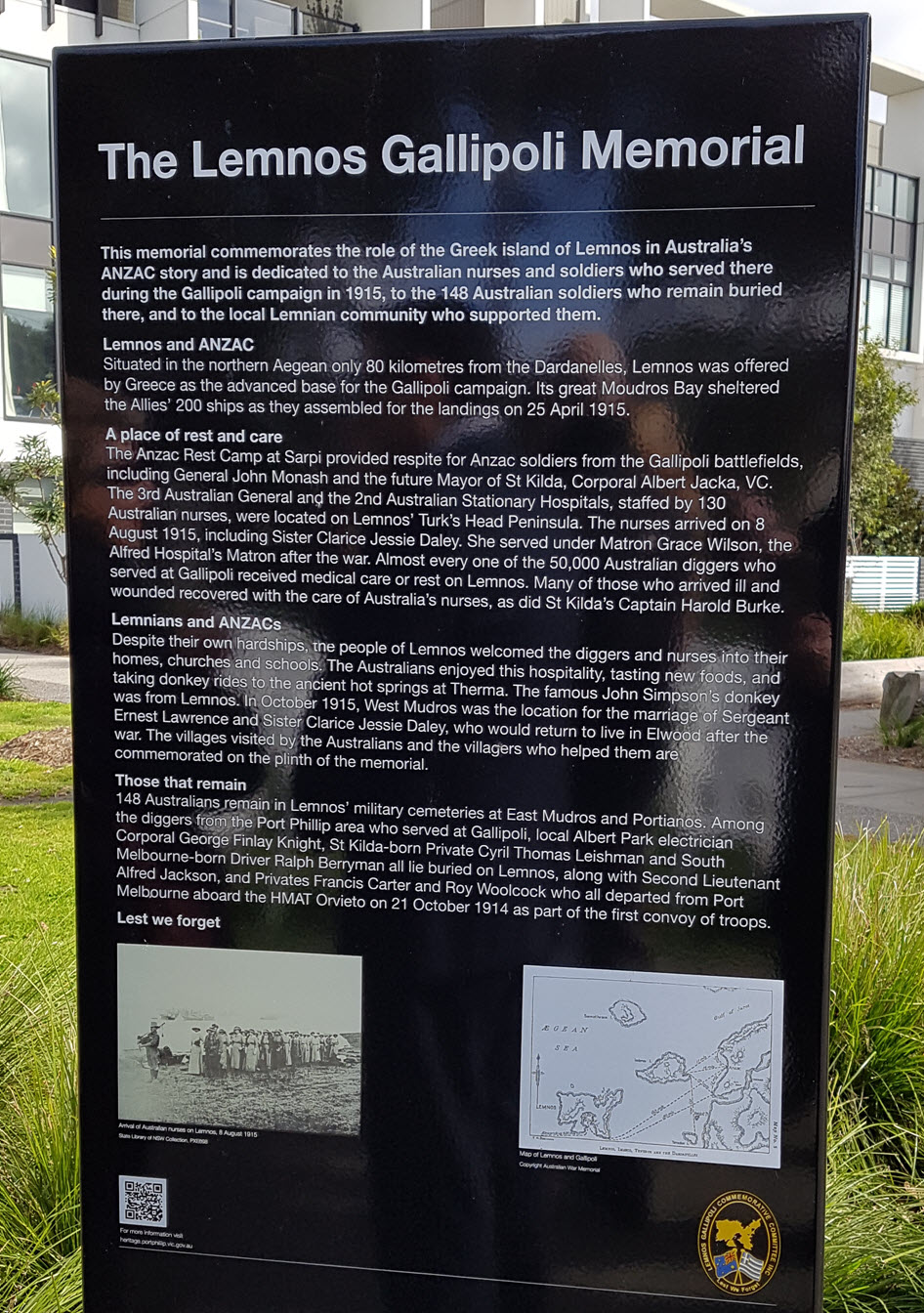 Thessaloniki Association “The White Tower” was also there supporting this wonderful initiative which exemplifies the ties between Greece and Australia, among a large number of other organisations which lay wreaths of respect to those who fought in the line of duty, for freedom and justice, in another land and another time. Thessaloniki Association was represented by the Public Relations Officer Mr Iakovos Garivaldis OAM.

In the words of the President of LGCC Hon Lee Tarlamis:

“…I would like to welcome all of you to the inaugural annual commemorative service at the Lemnos Gallipoli Memorial, Foote Street Albert Park. This is the first of our annual wreath-laying commemorative services. It is 12 months since we began our journey to erect this lasting memorial to the role of Lemnos in the Gallipoli campaign of 1915. The brochure explains the background to the Memorial and sets out the Order of Service for the commemoration. Photographs reproduced are from the collections held by the Australian War Memorial, the State Library of NSW and the private collections of former Nurses Mary McIlroy and Evelyn Hutt. I would like to thank our Secretary, Mr Jim Claven, for preparing the booklet, and our Vice-President, Ms Christina Despoteris, for organising this year’s commemoration, and all the other members of the Committee who volunteered their time and efforts. Thank you to all who participated in and attended this Commemorative Service to honour those who served on Lemnos, those who remain in its war graves and the local Hellenic population who assisted them.”

As you will see in the photos below, the service was supported on the day by a number of VIPs from the Victorian Government, the Local Councils, Community organisations, local schools and a number of people who were there to witness this wonderful event. The

As we know from history, the beautiful island of Lemnos, laying in the waters of the northern Aegean, was the essential base for the whole Gallipoli campaign. Lemnos provided safe harbour for nearly 200 Allied ships, including Australia’s famous AE2 submarine. Its people welcomed the ANZACs. Lemnos was where the ANZACs walked in the footsteps of Greece’s epic past. Lemnos was where the Armistice ending the war in the eastern Mediterranean was signed, and Lemnos was where over 200 ANZACs remain along with over 1000 other Allied soldiers, honoured in the island’s war cemeteries.

The invitation to this event is below: 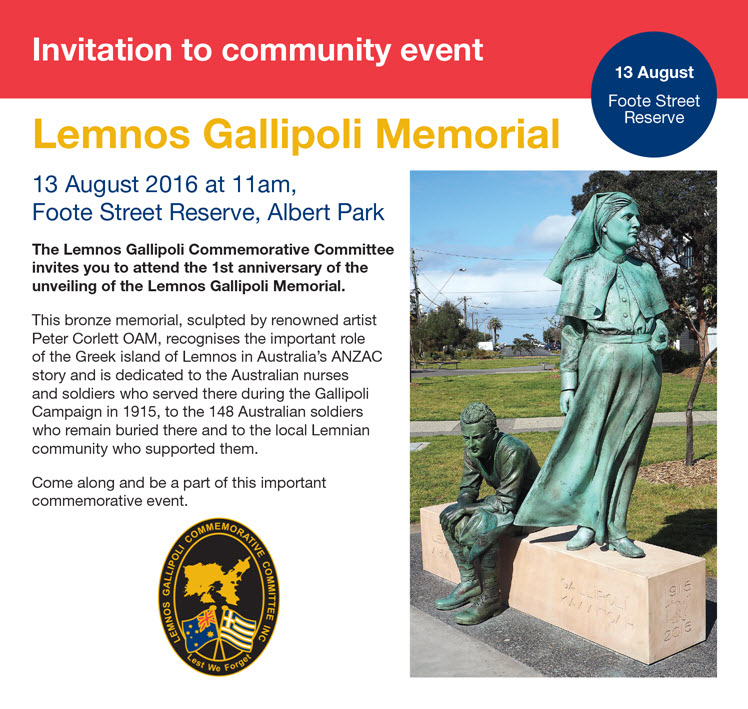 The annual commemorative service to honour the Greek Island of Lemnos’ role in the Gallipoli campaign will be held at 11am, Saturday 13th August 2016, at the Lemnos Gallipoli Memorial, Foote Street Reserve, Foote Street Albert Park. Members of the pubic are invited to attend.

Mr Lee Tarlamis, President of the Lemnos Gallipoli Commemorative Committee, said that the creation of the new Lemnos Gallipoli Memorial and its gifting to the City of Port Phillip had been a major milestone in the work of the Committee and the commemoration of Lemnos’ role in the Gallipoli Campaign.

“This year we will commence our annual commemorative services at the Memorial. We hope that descendants of those who served on Lemnos and the local Lemnian population – as well as the wider Australian and Greek-Australian community – will come to the event to honour the soldiers, nurses and local Lemnian population who came together in a time of war over 100 years ago, “ he said.

Mr Tarlamis said that it was the wish of the Committee that the annual commemoration be part of the annual calendar of Anzac commemorative events and play its part in ensuring that Lemnos’ role in Anzac is not forgotten.

The Memorial was sculpted by the renowned commemorative artist Peter Corlett, OAM. It comprises two evocative bronze statues – one of a nurse and the other of a digger – one standing and one seated on a carved stone plinth, along with information signage and flagpoles.

The Memorial recognises the important role of the Greek island of Lemnos in Australia’s ANZAC story and is dedicated to the Australian nurses and soldiers who served there during the Gallipoli Campaign in 1915, to the 148 Australian soldiers (along with 76 New Zealand and nearly 1,000 other Allied soldiers) who remain buried there and to the local community who supported them.

Ms Christina Despoteris, Vice President of the Committee, who is leading the organizing of the event, stated that the Committee would hold this service in August each year.

She explained that a formal commemorative service will be the centerpiece of the event, including the laying of wreaths at the Memorial. Mr Corlett will be in attendance and the service will include a keynote address by the Hon Ted Baillieu, Chair of the Victorian Anzac Centenary Committee and Former Victorian Premier.

“Mr Baillieu had been a keen supporter of the work of our Committee and the recognition of Lemnos and its role in Anzac. He addressed our Memorial launch held at Parliament House in October 2013 which began our journey to erect our Memorial,” she said.

The service will bring together descendents of soldiers and nurses who served on Lemnos , members of Victoria’s Lemnian and wider Greek community, as well as representatives of the RSL, nursing organizations, Federal and State parliamentary representatives, the Mayor and councilors of the City of Port Phillip and many members of the local and wider community.

Ms Despoteris urged all members of the public who wish to honour the role of Lemnos and those who served there in 1915 to attend the event.

A small taste of the service follows: